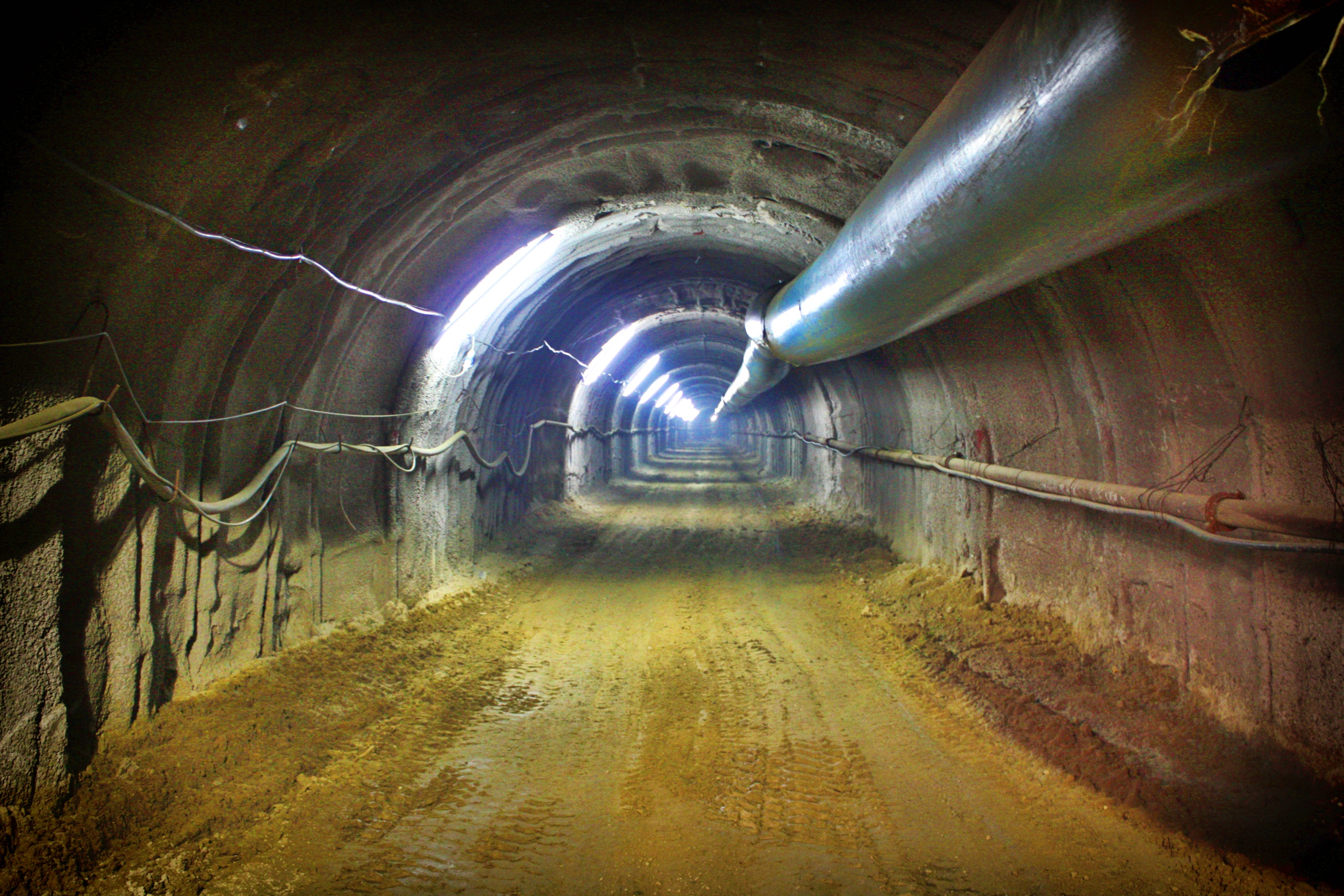 As part of the general program of improvement of the Naples water accumulation and distribution service, was developed by ARIN company in 1997, it was planned a storage tank in the area “Calori di Chiaiano” and the installation of DN1000 pipe to connect it to the reservoir of “S. Giacomo dei Capri”. The pipeline was conditional upon completion of an underground connection between the tanks. The underground works design provides a route between the tanks with a total planimetric development of 2408.80 m, 25.68 m in artificial tunnel and 2383.12 m traditional excavation tunnel. The planimetric route, marked by six straight sections connected by five constant radius curves, has been adopted in order to minimize the interference between the works of excavation and the dense built-up area, just like the “Monaldi” hospital. About the elevation, the route is marked by constant slope about 0.1%, with a difference of 2.64 m between upstream and downstream of the natural tunnel; the cut&cover tunnel, located on the side of Chiaiano tunnel entrance, is located at +220.60 m above sea level. The tunnel overburden along the route generally ranges between 50m and 100m, over then 25 diameyters, with the exception of the first section next to the Chiaiano side. The excavation has monocentric shape, 4,00m x 3,00m dimensions, with radius of curvature of 2,00m; the final excavation surface is amounted to 10,28m2. As usual in the context of tunneling of considerable longitudinal development, the definition of type cross-sections and excavation method results by a complex and detailed analysis of many conditions. These include tunnel geometry, stratigraphic and geotechnical characteristics and hydraulic boundar conditions. In the case, the results of geological study, geotechnical investigations and modeling of the subsoil led to the definition of six tunnel type sections, with different geometry, pre-consolidation and definitive lining. About the sequence of excavation required, it is provided the whole section along 2,00m of route, followed by temporary lining; after 10m of excavation, the invert will be executed, and after other 10m, the casting of piers and cap. 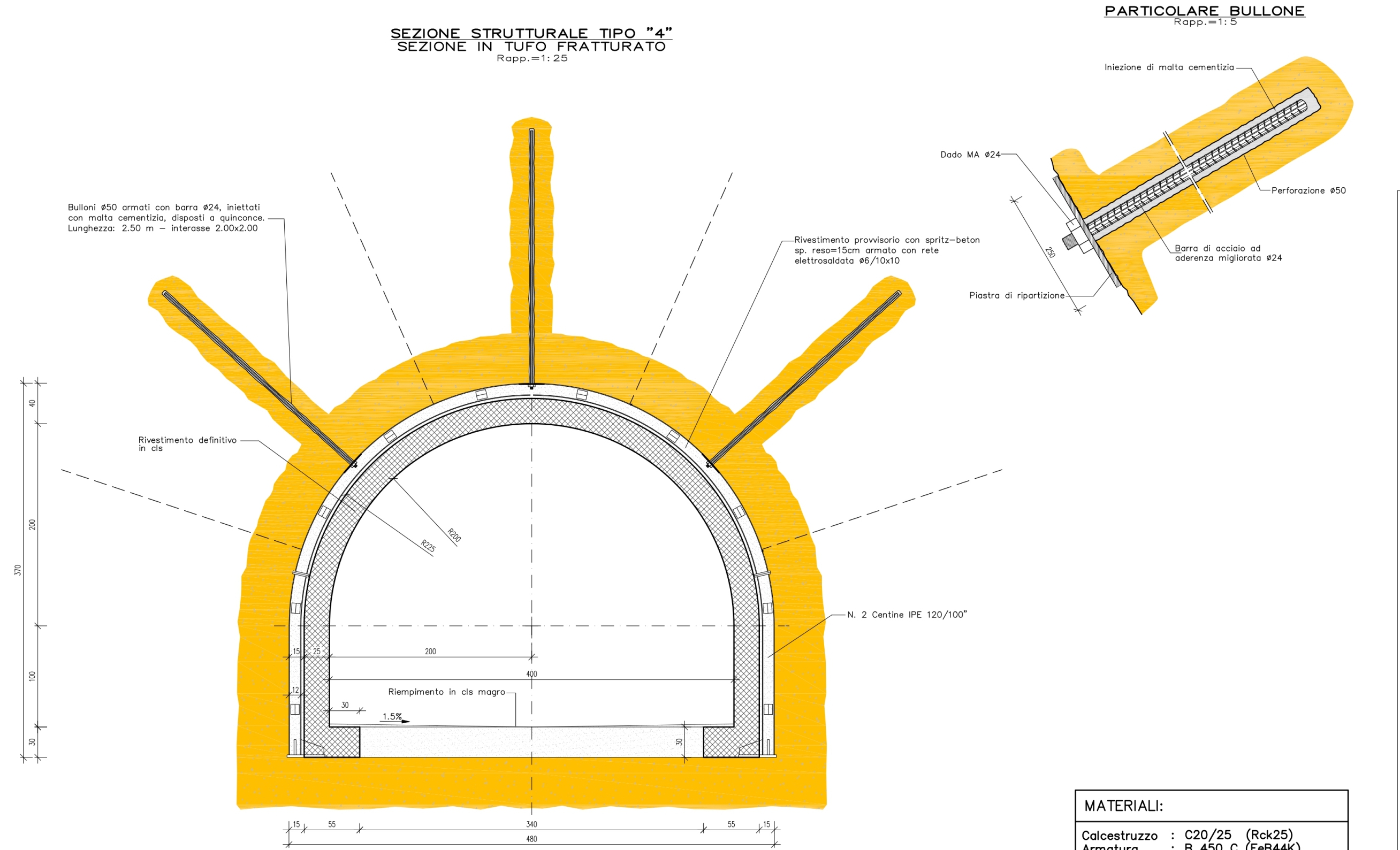 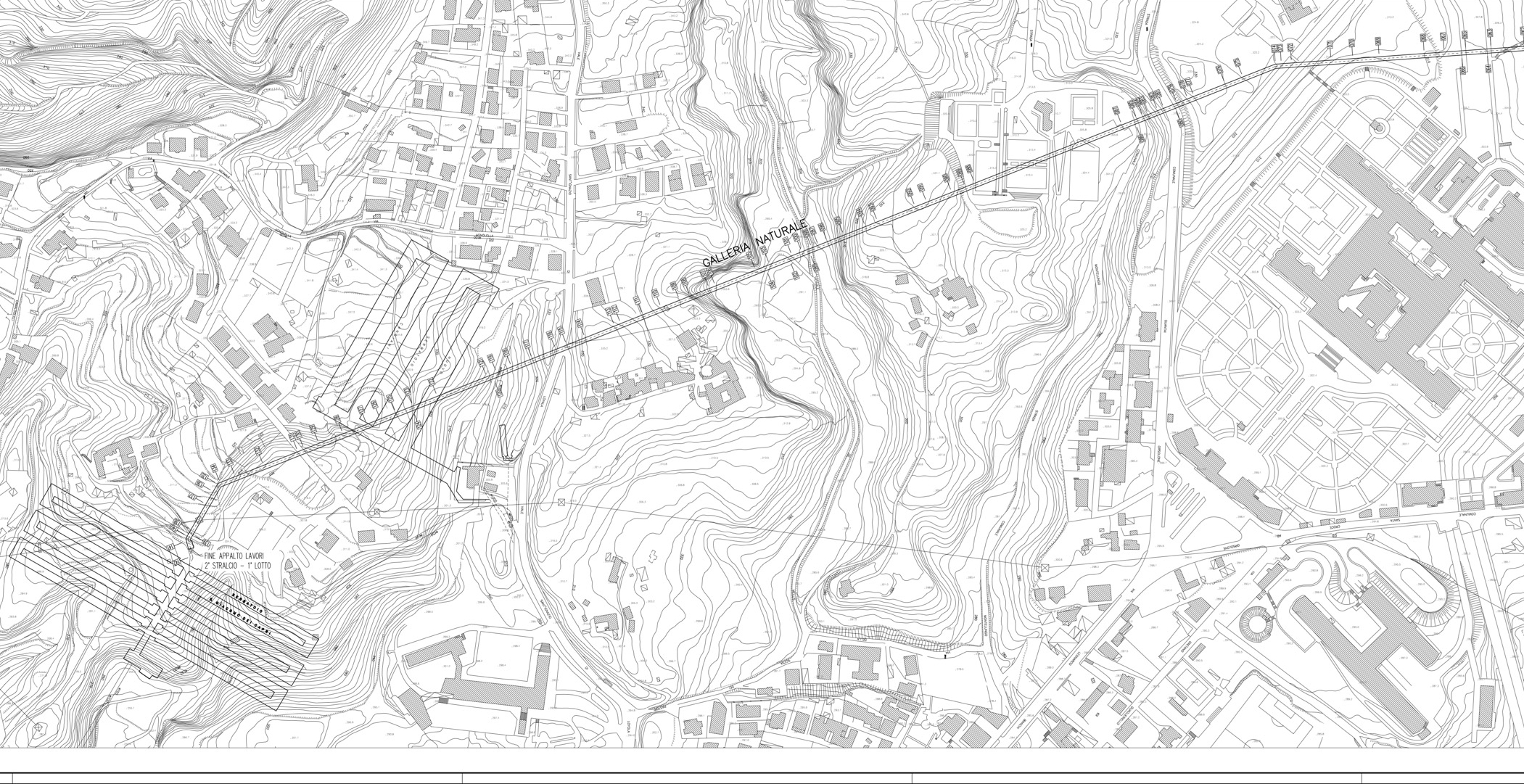 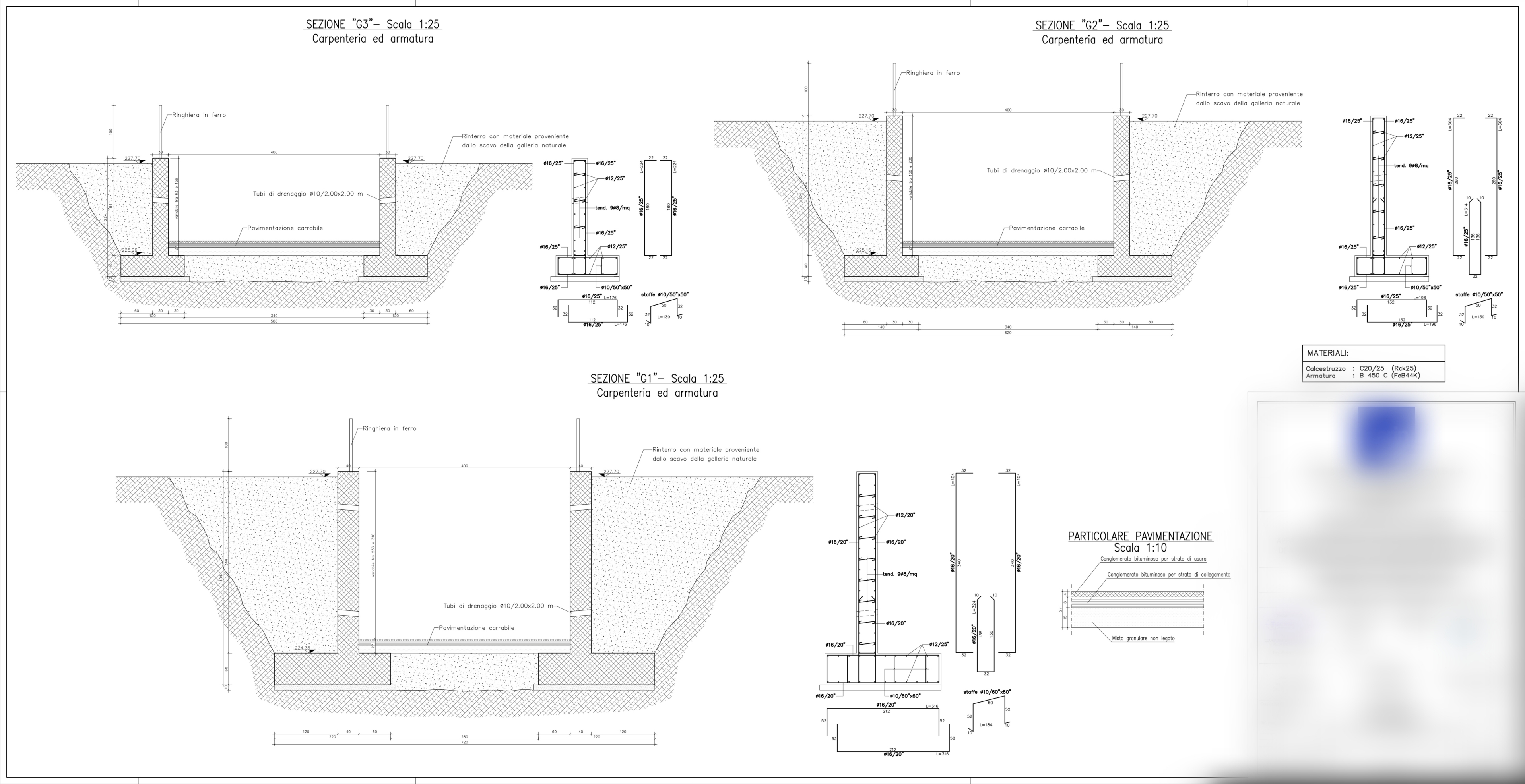 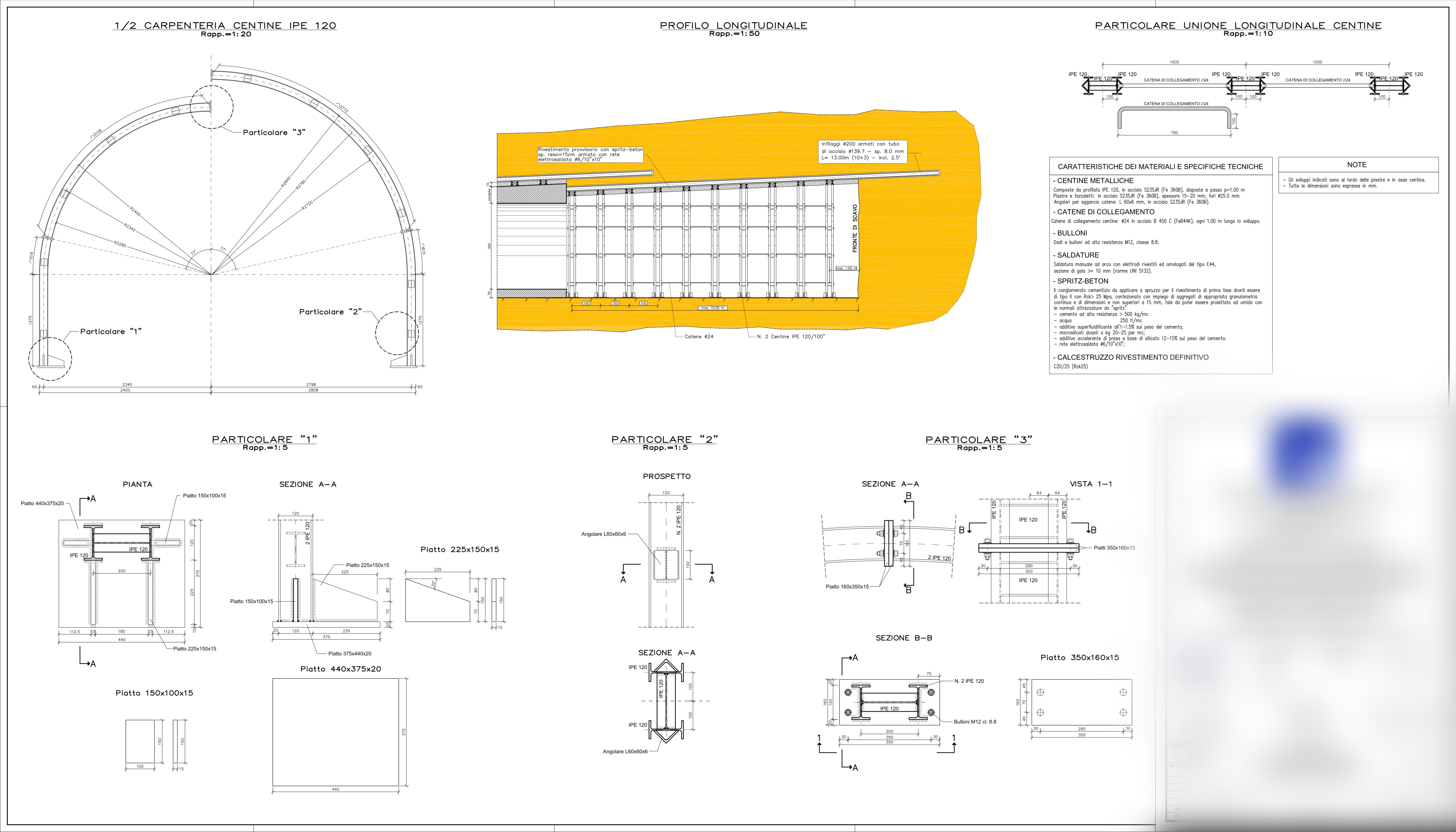